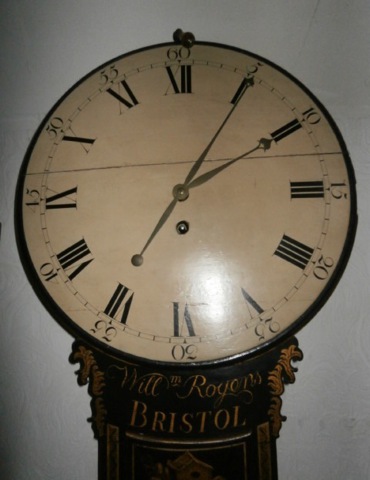 C1730 A George I eight-day longcase clock movement with lunar calendar, Edward Cockey, Warminster, circa 1720 The five finned pillar movement with anchor escapement for regulation by a seconds pendulum and inside countwheel hour striking on a bell mounted above the plates, the 12 inch brass break-arch dial with calendar aperture and subsidiary seconds dial to the basket of flowers, Ho-Ho bird and fruiting trail bright-cut engraved and chased matted centre within applied Roman numeral chapter ring with stylised fleur-de-lys half hour markers, Arabic five minutes to outer track and signed Edward, Cockey, WARMINSTER to lower edge, the angles applied with female mask and scroll cast gilt spandrels within a herringbone engraved border, the arch with rosette engraved centre incorporating circular aperture to reveal a lunar disc representation of the age of the moon and steel pointer for the fixed silvered outer scale calibrated for the lunar month and flanked by dolphin and foliate cast gilt mounts within conforming herringbone surround, 42cm (16.25 ins) high. Born in 1669, Edward Cockey senior was the son of Lewis Cockey (a bellfounder and clockmaker working in Warminster) from whom it is believed that he subsequently learned the trade. Edward was clearly a talented and well-connected clockmaker who in 1707 made an extremely complicated astronomical clock for lord Weymouth for the Great Hall at Longleat. Weymouth is thought to have subsequently commissioned Cockey to make another example as a gift to Queen Anne for her drawing room at St. James`s Palace (now in the National Maritime Museum, Greenwich). Edward Cockey junior was born in 1701 and, although initially thought to have followed in his father`s footsteps, apparently chose to become a wine merchant instead. There is a record of the death of an Edward Cockey clockmaker in 1768 (which probably relates to Edward junior). The dial of the current lot, with decorated centre and lunar calendar to arch exhibits Edward Cockey`s individual and innovative approach to both function and aesthetic quality. .  CLOCK  £5,500 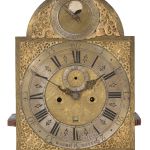 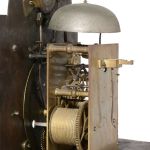 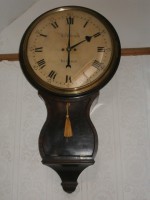